If you’ve never heard of the chaga mushroom, you’re not alone. Parts of Asia have used  Chaga mushrooms for thousands of years. This is due to chaga’s ability to boost immunity and help improve overall health. And now, the chaga mushroom is gaining popularity in the western world.

The chaga mushroom, whose scientific name is Inonotus obliquus, acts as a strong antioxidant. Many believe it can both prevent and cure several serious diseases. You can consume chaga in several different forms… If you love mushrooms and want to learn how chaga can improve your health, keep reading.

The use of the chaga mushroom is legal, as it is not listed on the World Anti-Doping Agency’s (WADA) list. Chaga is not a psychedelic mushroom. 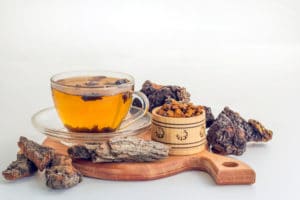 Chaga only grows on birch trees in cold climates in the northern hemisphere. You can find it in the United States, Canada, Eastern and Northern Europe, Siberia, and North and South Korea.

Depending on the location of the chaga, it goes by nicknames such as “The King of Herbs” and “The Mushroom of Immortality.” The chaga mushroom varies in size and shape, but it is always black and often has a hint of gold color. Chaga is typically anywhere between five and twenty inches in size and takes 10 to 20 years to grow. The outside of the chaga mushroom, referred to as the Sclerotium, is black, cracked, and very hard. The dark black color resembles charcoal. The inside part of the mushroom is softer and has a yellow or golden color to it.

The use of the chaga mushroom goes back thousands of years. In China, chaga was documented as early as 100 B.C.in a book by monk Shen Nong. The chaga mushroom also played a prominent role, historically, in Siberian folklore. Those living in the mountains smoked the fungus and rubbed it on their skin. They believed the mushroom would provide healing benefits.

In the 12th century, Russian Tsar Vladimir Monamah used chaga to heal his lip cancer. It is even possible that Otzi the Iceman, who lived 5,300 years ago, used chaga mushrooms. Those living hundreds and thousands of years ago recognized this: the chaga mushroom is magical.


Why Do People Consume Chaga Mushrooms?

There are endless health benefits of chaga. Here are just a handful of reasons as to why people consume this black mushroom:

Boosts the immune system: The chaga mushroom is a strong antioxidant, which means that it strengthens our immune system. When we have a healthy immune system, our bodies can fight against harmful free radicals that cause various forms of cancer and autoimmune diseases. These antioxidants also provide incredible benefits for our skin, hair, and nails.

Treats cancer: Scientific studies show that continuous use of chaga can reduce the size of various tumors and effectively treat cancer.

Reduces inflammation: Chaga can reduce chronic inflammation present in conditions like rheumatoid arthritis. This is because it helps regulate cytokine production.

Helps psoriasis: In 1973, a chaga study was conducted in Russia with 50 patients. All participants were cured of their psoriasis completely.

How Do I Use Chaga Mushroom?

There are many different ways to consume chaga. However, making chaga mushroom tea is the most common way to consume this powerful antioxidant. You can make chaga tea by using chaga mushroom powder in a single cup or by boiling chaga mushroom chunks in a large pot of water on the stove. If you’re a tea- or coffee-drinker, you can add chaga powder to these beverages for extra health benefits.

Another way to use chaga is to make it into a tincture for external use or internal use. You can make your own tincture by soaking the chaga mushroom in alcohol for a few months, or you can skip that and purchase pre-made tinctures online.

Lastly, you can consume chaga in capsule form. It is easier to consume chaga in capsule or instant form. However, the majority of the benefits get lost during the manufacturing process. Chaga, like most natural forest medicines, works best in its raw unaltered form. When making an herbal decoction or tea, steep the chaga at 176 degrees Fahrenheit or below. Or, you can extract it with pure-grade alcohol.

If you decide to use chaga capsules, remember the following:

Where Can I Get Chaga?

Most people purchase chaga in powder or capsule form online. You can also easily harvest it, if you know what to look for. In the northeast United States, chaga grows on paper birch or yellow birch trees. Chaga can also grow on cherry birch trees in the southern U.S.

Chaga mushrooms grow in various shapes, ranging from cone to dome shapes with sharp edges. If you decide to pick your own chaga, make sure always to take it from a living tree. Chaga is a parasite that grows on the birch tree, so if the tree dies, the mushroom will too. Further, try to harvest the chaga during the fall after at least 20 consecutive nights of temperatures at 41 degrees Fahrenheit or below. You can harvest through the fall and winter until the sap starts to run.

Avoid harvesting chaga after the sap has started running or during summer months. At these times, the chaga have less water content and fewer nutrients. In that state, they will not fully benefit your health.

Chaga can either be picked with your hands or chopped off with an outdoor knife. However, be sure to always leave some chaga (at least 15%) on the tree so it can continue growing.

If you’ve never tried chaga, what are you waiting for? There are scientifically proven health benefits to consuming this wild black fungus. There are very few reported side effects of chaga consumption. In fact, you can safely consume it daily in various forms. Whether you want to prevent cancer or normalize your blood pressure, or you want to do good for your body, chaga can help.